Continuous localization of mobile units such as automatic guided transport systems or mobile assistance robots is already a basic technology in automation and logistic. At the same time, existing localization systems entail a substantial investment in infrastructure and/or mobile sensor systems. Visual self-localization on the basis of inexpensive digital camera systems provide more significant potential to cut costs and opportunities to develop new users and fields of application, especially among small and medium-sized enterprises.

In light of these considerations, the content of this subproject of the joint project AVILUS+ was the development of a visual position tracking systems specifically for environments such as factories and warehouses:

Camera-based navigation and localization of a mobile robot through the use of existing natural features in factory buildings.

Concrete emphases of development were the following technological aspects:

The developed systems were implemented as a prototype of a compact, integrated sensor unit for installation on mobile systems. The system includes two cameras for markerless and marker-supported localization as well as additional LED lighting and computer technology. Industrial ethernet can be used for data integration. 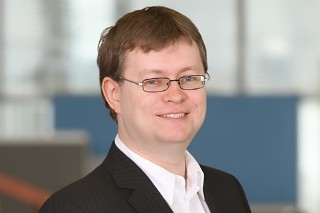