Human-Robot collaboration in shared work areas not only increases economic efficiency in many domains of manufacturing but also relieves humans of dangerous and non-ergonomic work. The safety requirements are extremely high. Humans may not be harmed under any circumstances.

The project STROBAS is using die making to demonstrate how a robot’s load carrying capacity and precision supports workers performing physically strenuous jobs. The innovative safety technologies being developed at the Fraunhofer IFF eliminate any risk to humans.

Dies used to be made laboriously by hand. The halves of a die must fit together perfectly so that the no plastic or molten metal escapes when it is filled. To this end, the contact surfaces of the halves are ground by hand and put together again and again until they fit without gapping. Since dies have high weights of up to 30 kg, this is extremely physically stressful for workers.

The STROBAS assistance system developed makes this job considerably more ergonomic. At the push of a button, the robot employs a stereo camera system combined with the Fraunhofer IFF’s tactile sensor technology covering the workbench to detect a mold half and grasps it automatically. Then, the operator grasps a special, ring-shaped input device to move the die supported by the robot in space to any machining position with little resistance and lock it in place. The robot carries the load. The human deftly guides the robot. Additional functions such as automatic application of pressure on the top or bottom of the die or movement of the die to stored machining positions not only relieve workers physically but also expedite the procedure.

Novel safety mechanisms ensure that the robot does not endanger humans. The ring-shaped input device continuously monitors whether the worker is holding it with both hands and stops the robot if the worker lets go or holds too tight. This protects operators from pinning themselves by accident.  The Fraunhofer IFF’s projection system is used to prevent a robot moving in automatic mode from colliding with humans. It assures that the robot comes to a stop immediately if, for instance, the operator’s hand breaches the contour projected around the robot.

The Fraunhofer IFF is using this project to demonstrate a model application for safe human-robot interaction. 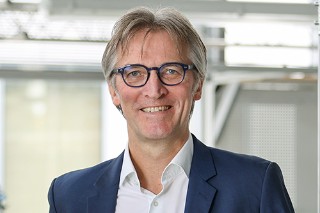